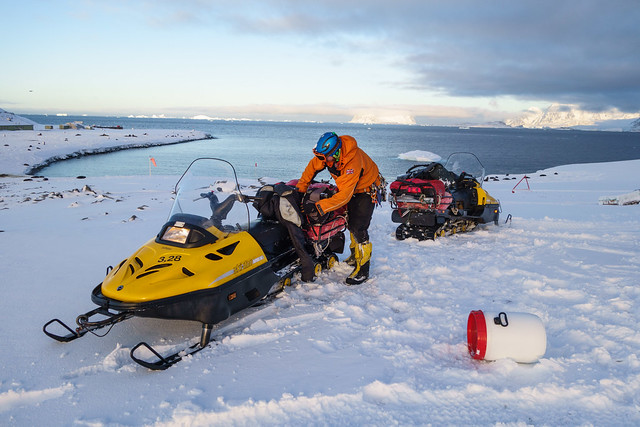 Packing skidoos flickr
Phil bungees kit down on the skidoo.

Winter trips are a feature unique to BAS. Each winterer on a BAS station gets to spend two weeks away from base for outdoor activities with a field assistant. At Rothera, this involves travelling by skidoo or on skis, camping in pyramid tents, and getting to walk, climb, or ski as desired.

These periods not only offer a brief window of R&R, and a break from the routine of station life, but also provide an opportunity to practise campcraft and winter mountaineering.

My turn arrived in the last week of April, and after discussion with Phil – the field assistant on the trip – our plan was to travel by skidoo to the western side of Adelaide Island and attempt to climb the Myth, a particularly striking mountain accessible only from that side of the island.

The western side of Adelaide Island is accessible by land, but only by travelling through the heavily crevassed McCallum Pass, which is adjacent to the Shambles Glacier, and hence requires good weather to navigate.

Whilst each trip involves one ‘tourist’ and one field assistant, there are two trips away from base at any one time. It’s not uncommon for trips to double up, and in this case, Dan and Malcy happened to be out at the same time and it transpired that their intentions were identical to our own.

On Sunday morning, after an early breakfast, we headed out from Rothera to collect the two Nansen sledges that contained all the equipment to be self-sufficient for up to a month away from base. The main sledge contains kit and supplies we intend to use (food, fuel, HF radio, pyramid tent, P-bags), whilst the second Nansen contains emergency kit that we hope not to need.

When travelling off-station, BAS employs a system called ‘linked-travel’ to reduce the consequences of falling into a crevasse: the front skidoo hauls a lighter Nansen sledge, which in turn is linked to the second skidoo towing a heavier sledge. Furthermore, when driving skidoos, we’re attached to the skidoo with a shock-absorbing line running from our climbing harnesses to the rear of the skidoo. If a skidoo does fall into a slot, its fall should be arrested by the other skidoo and sledges, and the driver should end up dangling safely(!) underneath the skidoo – in theory. 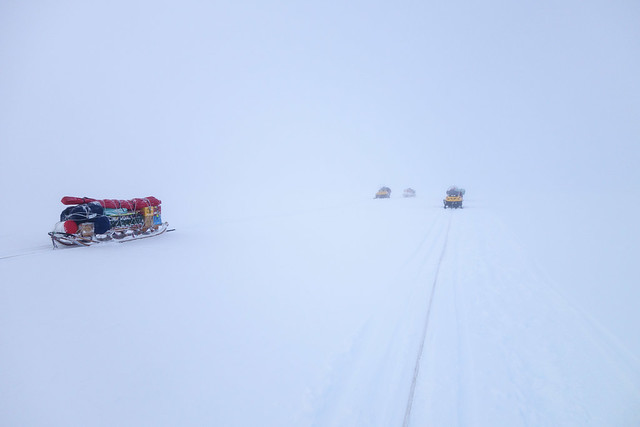 Poor visibility flickr
At the entrance to McCallum Pass, the weather comes in.

Despite an optimistic weather forecast, after driving north towards McCallum Pass for a couple of hours the reality was that the conditions were against us: visibility <100m, with no contrast and no horizon. We scrubbed our attempt for Sunday, and made camp close to Trident Peak, around 20 minutes from the entrance to the pass, planning to try again on Monday. 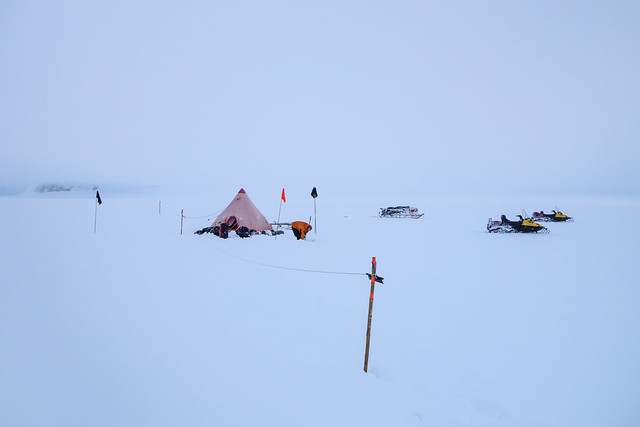 Camping at Trident East flickr
Unable to get through McCallum Pass, we pitch camp to the east of Trident. 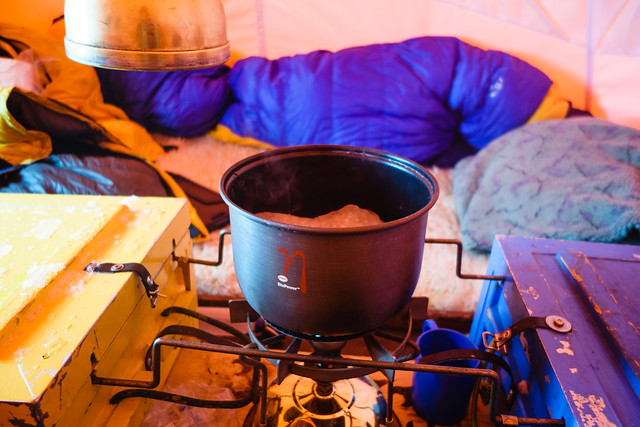 Snow melt flickr
In the field, water comes from melting snow blocks over a Primus stove.

Fortunately, after spending Monday morning waiting around, the weather lifted and we promptly packed up and made for the pass. Conditions were dramatically different – with the sun even making an appearance – so without further hesitation, we cracked on.

Navigating through the pass took over an hour of slow descent, followed by some sharp turns to avoid crevasses, and then a slog uphill, requiring both skidoos to haul each sledge in turn up the steep terrain.

On reaching the other side, we paused briefly, knowing that we had at least a further two hours drive to our intended campsite and aware that the hours of daylight were limited. 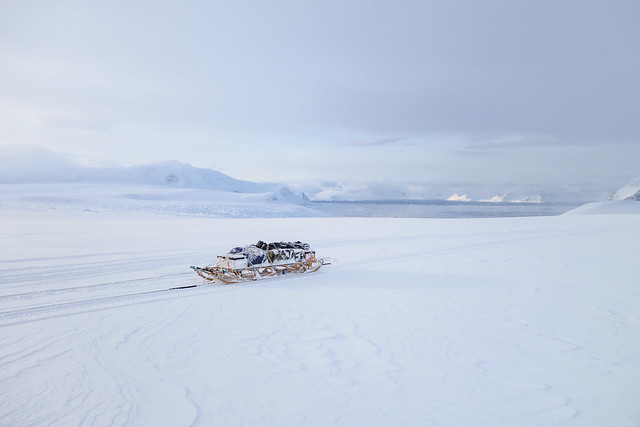 McCallum Pass flickr
Looking north from P Buttress across McCallum Pass, with the Shambles Glacier and Stonehouse Bay in the distance.

A couple of rather cold and windswept hours later, we arrived at our planned campsite, close to the Myth. However, during the journey the weather had closed in, obscuring any view of the surrounding landscape.

We pitched camp and after making dinner, we received an updated weather forecast from Rothera at our evening scheds on the HF radio. The weather for Tuesday was looking good, but Wednesday even better, and a new plan was made: visit Carvajal on Tuesday, and the Myth on Wednesday. 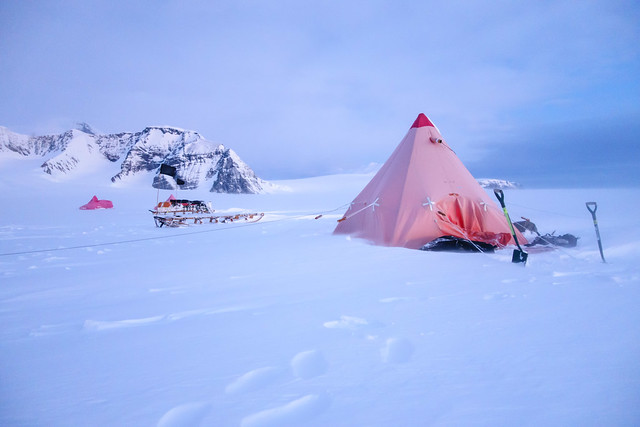 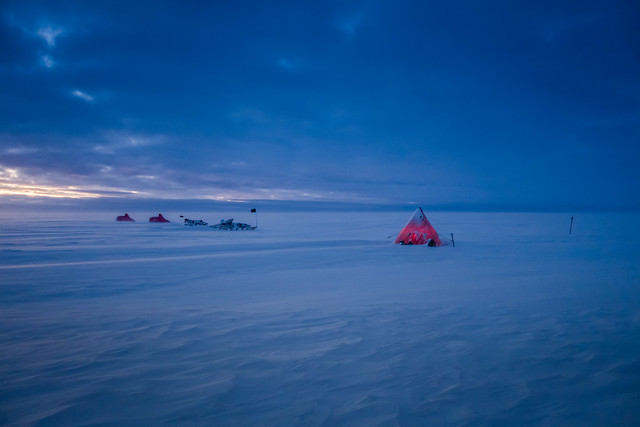 Camp – Fuchs Ice Piedmont #1 flickr
A radically different view in the other direction: an unbroken flat white expanse to the coast some 50km away.

Carvajal is a former British station (Base T), and was the first permanent base on Adelaide Island. However, resupply was often challenging due to rough seas, and its skiway gradually became unusable, leading to Britain selling it to Chile in 1977. Since then, it’s been largely abandoned and occupied for only a few weeks of each year. It’s a regular attraction on winter trips from Rothera, as it’s a near-perfect timecapsule of how an Antarctic research station looked 30 years ago.

A prompt start on Tuesday saw us underway to Carvajal at first light, and as we drove the 25km south, we were treated to a myriad of pinks and oranges as the early morning light lit up the snow and sky around us. 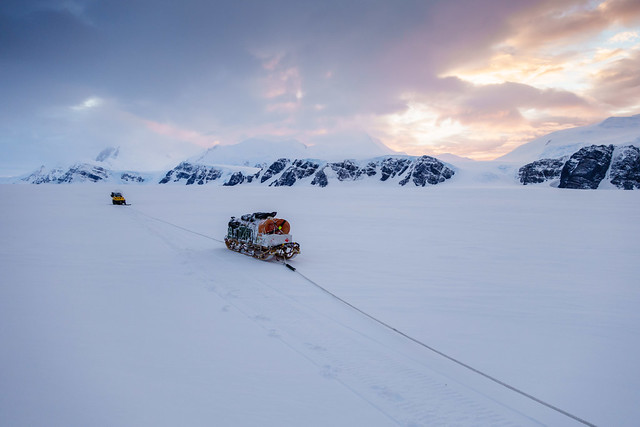 Half-unit flickr
Travelling as a half-unit, behind Chucky's skidoo is the half-unit Nansen sledge and my skidoo.

We left the skidoos close to the wreckage of an old Otter aircraft, and walked the final kilometre down the steepening glacier towards the station, working our way through the obstacle course of a colony of bad-tempered fur seals. 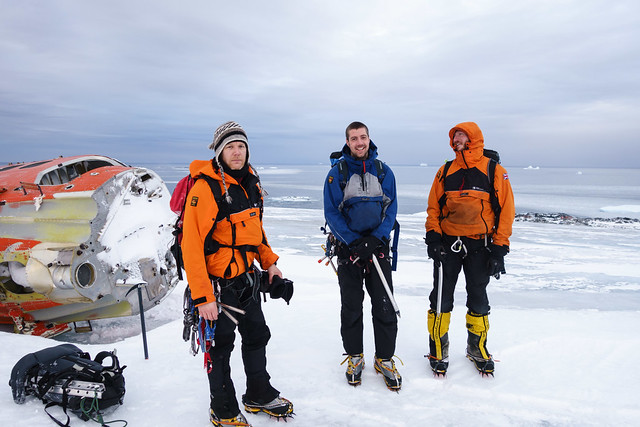 Hectors flickr
Dan, Malcy, and Phil stand next to the Otter with Carvajal in the background. 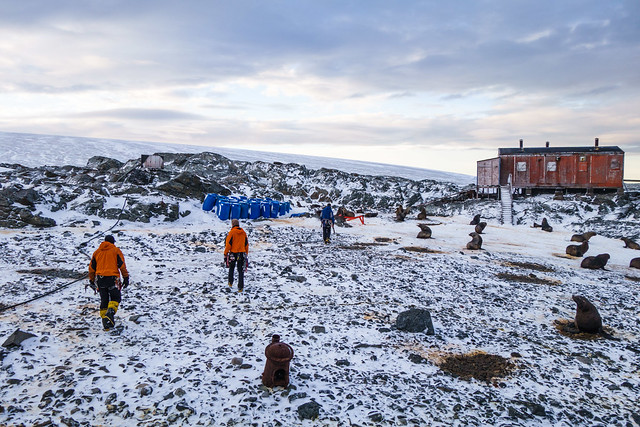 No man's land flickr
Getting to the generator shed at Carvajal requires negotiating a pack of disgruntled fur seals. 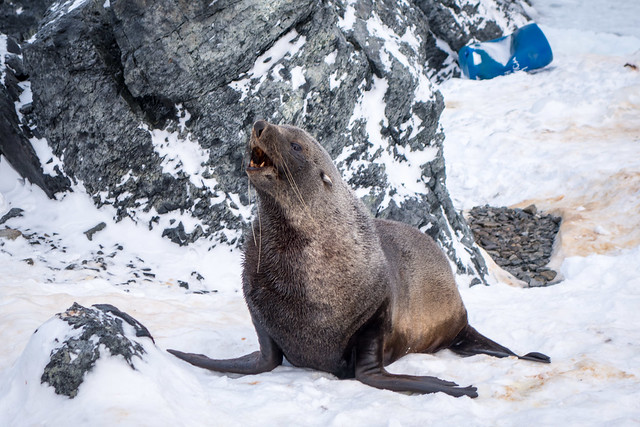 Furry #1 flickr
This chap did not take kindly to our presence and stoically stood his ground. 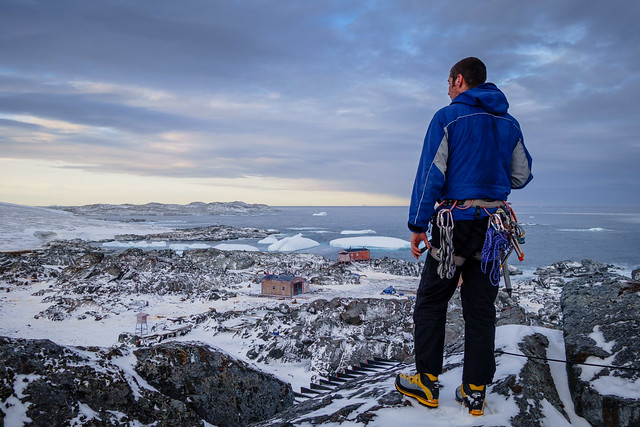 Malcy & Carvajal flickr
Malcy surveys the deserted base of Carvajal. 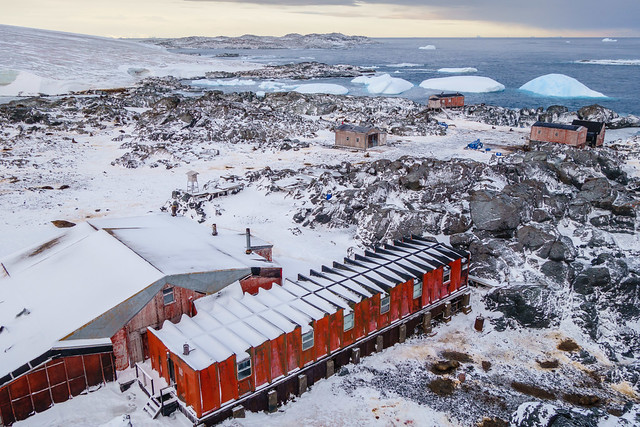 Carvajal from the observation point flickr
All of Carvajal's buildings in one shot. In the distance, the masts on Avian Island are visible.

We spent the rest of the morning exploring the base, before an impromptu lunch at the old observation point that offered panoramic views of the surrounding coastline. 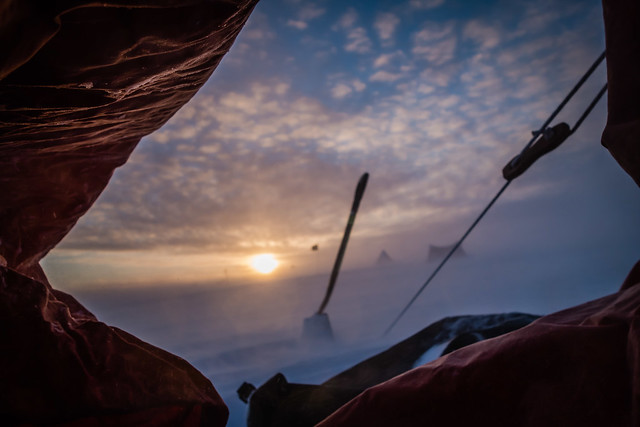 Dawn at the Myth flickr
We wake up to be greeted by 30kts winds and blowing snow. A day of lie-up then.

Rather than the good weather we’d been hoping for, Wednesday transpired to be a day of lie-up in the tent, with 30 knot winds and blowing snow. Standard lie-up activities included reading, cards, Yahtzee, and a social whiskey in the evening after radio scheds. 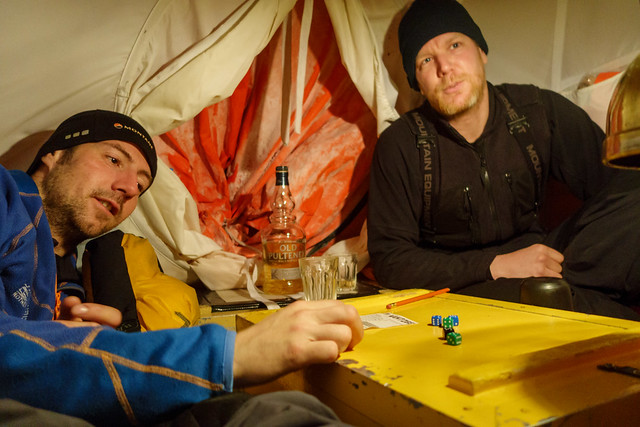 Regrettably, whilst the forecast for Thursday was workable, the weather for Friday and Saturday looked poor. To avoid getting delayed and risking other folks trips, we headed back through the pass on Thursday, leaving the Myth unclimbed – an aspiration for another time. 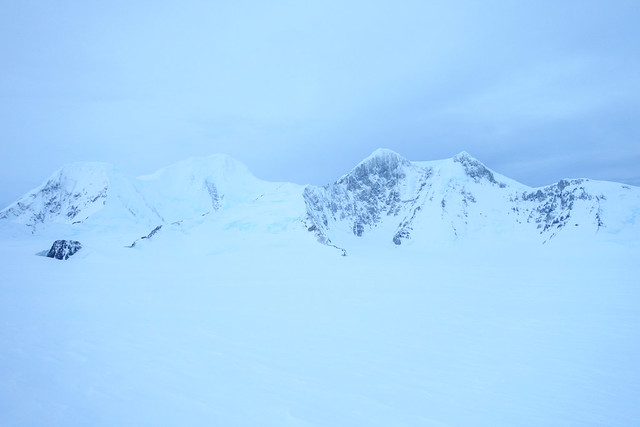 The Myth & The Legend flickr
Due East of our campsite is the Myth and the Legend. The jagged ridge between the two peaks remains unclimbed.