Despite its depiction in popular media, scientific research often boils down to repetitive, mundane experiments, conducted in a lab, with varying degrees of natural light. That said, the Aircraft Deployable Ice Observation System (ADIOS) is not your typical science experiment.

Rising sea levels present one of the largest threats of anthropogenic climate change, and in order to predict the likely changes to sea level, it is crucial to understand how the Antarctic ice sheet is behaving - if the whole of the ice sheet destabilises and melts, this would raise sea levels by around 57m.

The iSTAR project aims to find out what’s causing the rapid ice loss from Pine Island Glacier in order to help make better predictions for the future. iSTAR is a large science programme: running over six years, involving 11 UK universities, and funded by NERC to a tune of £7.4 million - it’s blockbuster science. 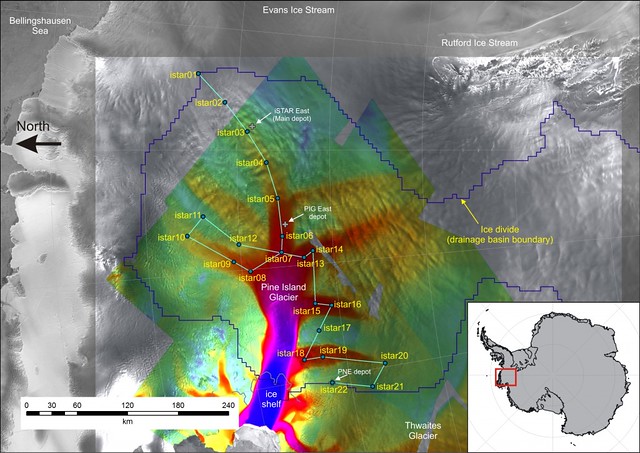 Whilst a major part of iSTAR involves a 800km traverse by tractor train across the Pine Island Glacier, parts of this glacier and the Thwaites Glacier remain too heavily crevassed to contemplate access on the ground. These crevassed areas often occur in highly dynamic regions of the ice stream, which are of the most interest to scientists – hence having a means of instrumenting them is highly desirable.

This is where ADIOS comes in. Using a modified Twin Otter Aircraft to overfly the glaciers, javelin-shaped devices about 2.5m long and 15cm in diameter are dropped through a sonobuoy launch tube, and stabilised by a small parachute, hit the ice below at around 90mph, embedding themselves around 10cm into the ice. The payload of each javelin consists of a lithium sodium chloride battery pack, a low-power single-band GPS receiver, and an Iridium satellite data transmitter. Once deployed, the javelins take six GPS position fixes per day and transmit it back home over the Iridium network.2

The engineering challenges involved with ADIOS were non-trivial: developing an entirely novel design of instrument that could be deployed by aircraft, incorporating a high-accuracy GPS receiver and Iridium satellite phone that could operate on low-power and at cold temperatures – all whilst being able to survive a 900G deceleration that each javelin experiences when it hits the ice.

Prior to commencing this season’s planned deployments, the ADIOS team wanted to take the opportunity for two field tests: firstly to test a couple of prototypes for future generations of the ADIOS system, and secondly to test a new optical aiming sight for use this season.3

Last Saturday, Scott and I pegged out a target on the skiway near Rothera to act as an aiming point, and so that we could feedback to the aircraft corrections from the previous drop, we also flagged out a 100x100m grid centred on this target 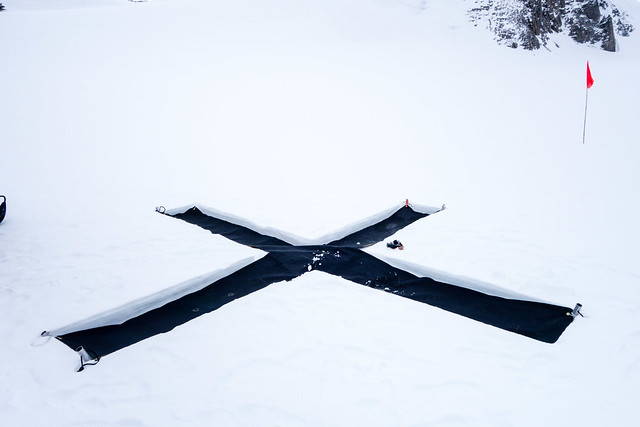 ADIOS target flickr
A 5x5m black fabric cross marks the target for the ADIOS javelins, just west of the skiway near North Stork.

For the tests, in addition to the crew in the Twin Otter deploying the javelins, another Twin Otter was used as a chase plane flying in formation to capture aerial footage of the prototype javelins deploying. As the ground team, Scott and I positioned ourselves a safe distance away on one of the low ridges leading up towards North Stork, giving us a decent view of the target area and the aircraft as they flew overhead. 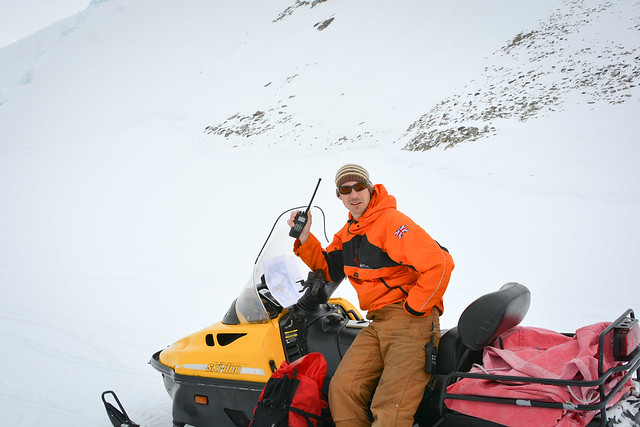 Broadsword, broadsword... flickr
Scott on the aero VHF radio telling the aircraft that they're cleared for dropping javelins.

As the Twin Otter flew over, I was tasked as cameraman, trying to get some shots of the javelin exiting the launch tube from the bottom of the aircraft, whilst Scott acted as a spotter trying to watch the javelin all the way down so we could find it in the snow. 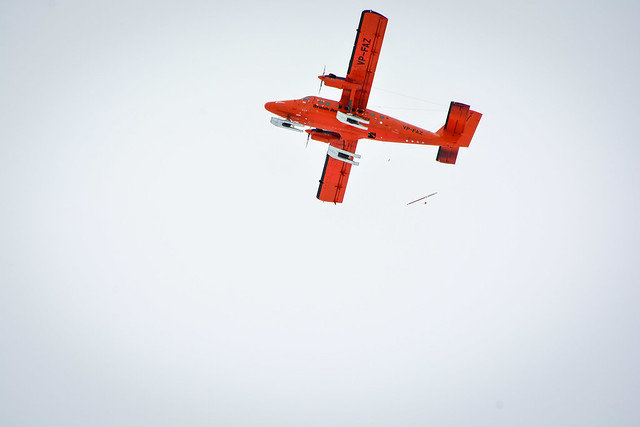 Javelin away! flickr
Alpha-Zulu drops a javelin. The small drogue parachute ensures that it falls in the correct orientation after deployment. 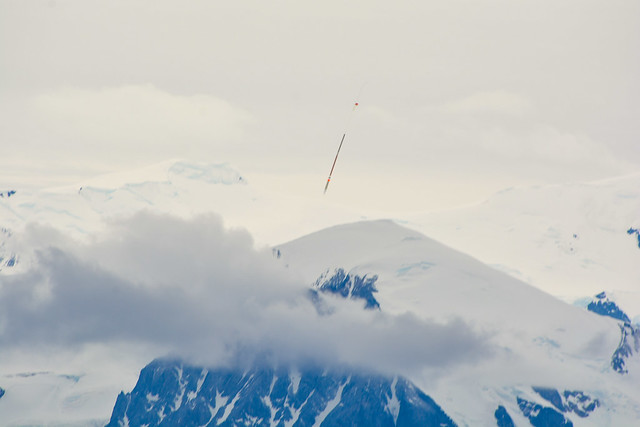 Plunging to earth flickr
Once released from the aircraft, the javelin follows a ballistic trajectory to the ice below.

After each drop, we’d skidoo down the the dropzone, put a marker flag next to the javelin to find it easily later for retrieval, and mark the GPS position of the javelin to advise the orbiting aircraft of the position. 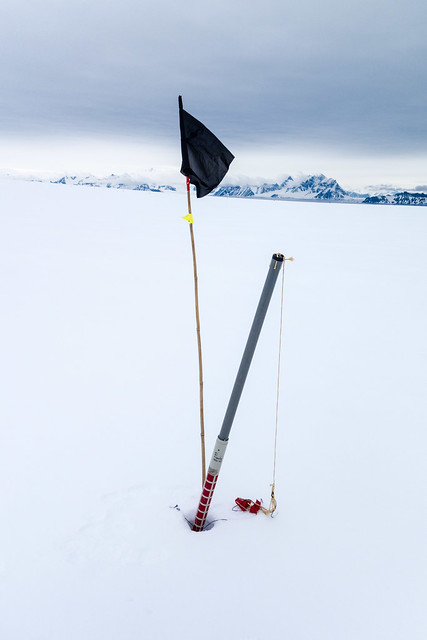 Embedded flickr
We've marked this javelin's position with a numbered flag to identify it later.

Outcomes from the test drops were broadly positive: both prototypes seemed to perform well and fell in the correct orientation. The optical sight proved tricky to use, with its view partially obstructed by the skis on the aircraft’s landing gear, but allowed an accuracy of within 200m which should be adequate to avoid large crevasses in the field.