Antarctica presents a challenging environment to the unwary, and given that Antarctic expeditions are often as famous for their heroic failures as for their successes, BAS takes field training seriously.

Field training is without doubt the most enjoyable part of induction for new arrivals on station. BAS has split training into modules covering areas such as stoves and campcraft, basic mountaineering skills, crevasse rescue, linked travel on skidoos, and travelling on sea ice. 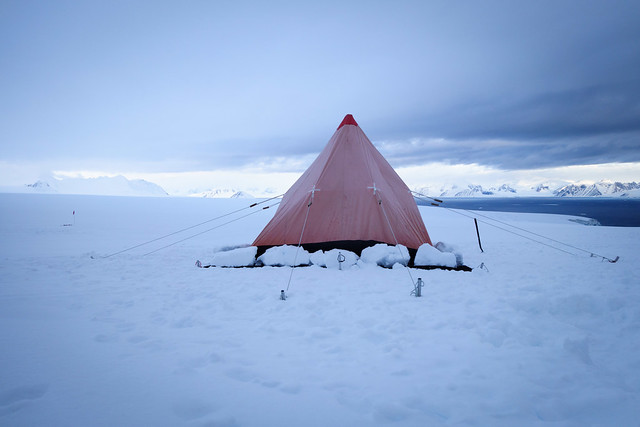 Pyramid tent flickr
Unchanged in design since the time of Scott and Shackleton, these pyramid tents are made of Ventile cotton and are still the best tent for polar use.

On Monday, I met up with Scott – one the Field Assistants1 – to go over stoves and lighting in tents. BAS still uses a traditional paraffin Primus stove as its primary stove, and Tilley lamps as a light/heat source. This perhaps unusual choice is due to several factors: paraffin doesn’t freeze in Antarctic conditions, it’s non-volatile so lessens the risk of frostbite due to evaporative cooling if spilt on you, and presents a lower fire risk if spilt. Further, Primus stoves are reliable, served on countless polar expeditions, and easily field maintainable.

BAS has made a couple of modifications to the standard Primus setup, using a customised cooking ring to raise the height of the pan above the flame, which dramatically reduces the amount of Carbon Monoxide (CO) produced when cooking. We also always use CO detectors in tents when cooking, which alarm if levels rise too high.

We also assembled my P-bag – BAS’s custom sleeping system. Consisting of a foam rollmat, thermarest, sheepskin, down sleeping bag, fleece liner, fireproof sleeping bag cover, and emergency bivi bag, light it is not. Thankfully, rather than manpacking this kind of stuff, it gets put on a Nansen sledge and towed behind a skidoo.

After lunch, four other new arrivals and myself packed our overnight gear into a Snowcat, and trundled off up to Vals, a gentle bowl and popular skiing area around 20 minutes away from station. 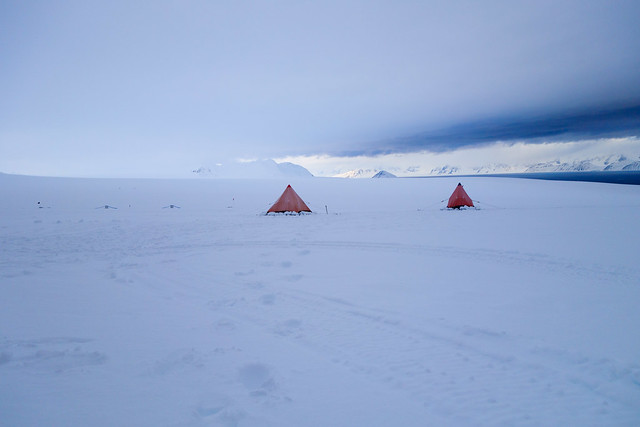 Camping at Vals flickr
Our two pyramid tents pitched and ready for use.

Here we learnt how to pitch a pyramid tent, almost identical to that used by likes of Amundsen and Scott. Pyramid tents have four scaffolding-like poles meeting in the middle, with the outer made from Ventile cotton which gives excellent weather protection and breathability in sub-zero temperatures.

The tent is stored ready-to-go, with the poles and inner in place. When it’s time to pitch camp, after selecting a site and preparing the snow, one simply digs four holes for each of the poles to bed them in, and then pegs out the guys and snow valence, and then cutting snow blocks to place on the valence to hold it down.

Once erected, one man goes inside to lay out the groundsheet whilst the outside man passes plywood sleeping boards2 and P-bags inside, followed by other boxes from the sledge including the stove box, pots box, HF radio, and manfood3. 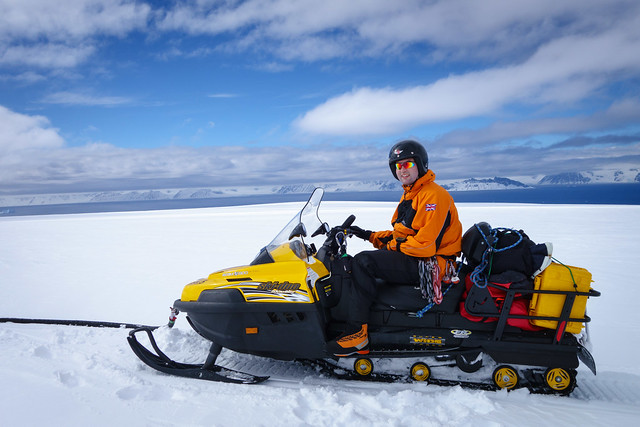 On the skidoo flickr
Sitting on the skidoo waiting to move on. When travelling linked, we keep a climbing harness on and use a safety rope to tie ourselves to the back of the skidoo.

Tuesday saw us learning basic mountaineering skills, such as fitting and using crampons, security on steep ground, roping up as alpine pairs, and ice axe use, including ice axe arrests. The latter activity involving sliding down a steep slope in a windscoop4 near Reptile Ridge, attempting to arrest our slide – with mixed results!

I spent Wednesday with Scott to go over crevasse rescue techniques and linked travel training. When travelling any distance on a skidoo, BAS policy is to link skidoos together with a rope in order to offer some protection if one skidoo falls into a crevasse. When driving a skidoo, one wears a climbing harness and is tied to the skidoo with a safety line and a shock absorber. In between the skidoos is a Nansen sledge, running about 10m behind the front skidoo, carrying fuel, manfood, radio, a tent, stove box, medical box, Iridium satellite phone, and pots box. In the skidoos themselves, we carry some personal kit and a rescue sack, containing a climbing rope, crampons, snow stakes, ice axe and ice screws.

We spent the morning packing the sledge and skidoos, before setting off at around 11am. Conditions were good, with a light wind, sunny skies, and temperatures around -5ºC. Our route took us to the north end of the skiway up near some peaks known as the Storks range, before travelling over a flat expanse, heading north west towards McCallum Pass – the only navigable route by land to the west side of Adelaide Island. 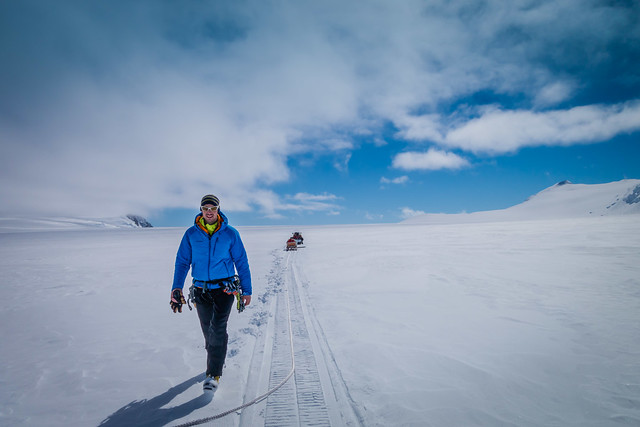 Scott on McCallum Pass flickr
Scott, one of the field assistants, approaches to give advice on the route as we near McCallum's Pass, which is in the far distance. We head right, round the back of Trident Peak.

Before reaching McCallum Pass, we turned east, heading behind Trident Peak down into a glacial bowl known as Sunnyside Bowl. This lived up to its name in spades, presenting us with a spectacular vista. 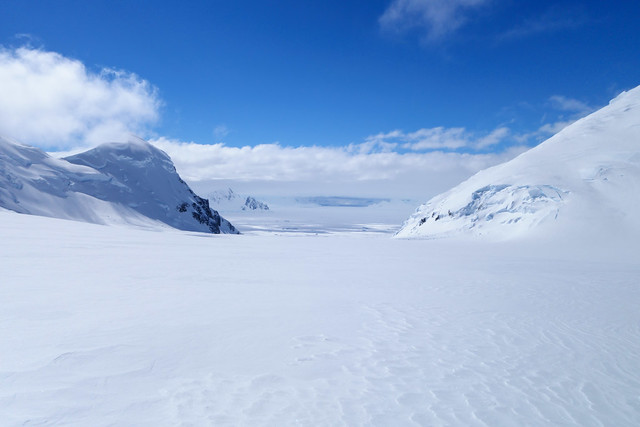 Sunnyside Bowl #1 flickr
A glacial bowl at the head of the glacier north of Trident Peak. We were treated to a spectacular view.

Around an hour’s ride later, we approached Meredith Peak5, which had a decent windscoop for intended site for crevasse rescue training. We stopped the skidoos and ate lunch of biscuits brown and tinned cheese, sitting on the Nansen sledge admiring the view. 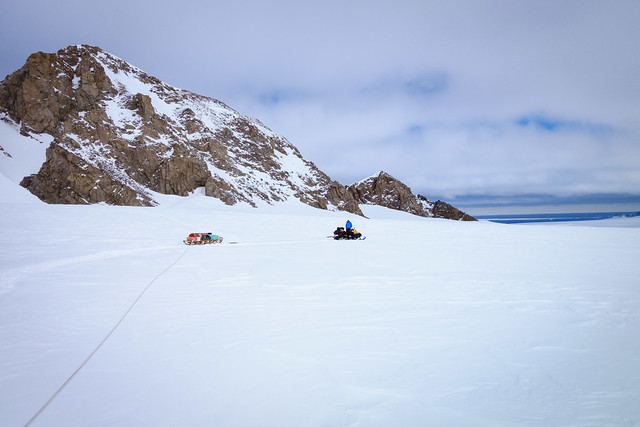 Meredith Peak flickr
The venue for my crevasse rescue training, we park the skidoos here, before roping up and approaching the windscoop near the peak to simulate a crevasse.

We roped up as an alpine pair and walked up towards the windscoop. As we approached, my left leg abruptly disappeared, dropping me down to my waist in the snow – a crevasse! One acquires a remarkable ability to rapidly levitate oneself out of a hole when required! Rolling onto my front, the hole where my leg had been opened up into a narrow crevasse lit up with deep, varied blues emanating from the ice below.

We reached the windscoop without further incident, and after checking the area was safe, used our rucksacks as a simulated casualty for me to attempt to rescue. After running through the various techniques, we made our way back to the skidoos and headed back to Rothera – my first Antarctic mini-adventure complete.