After two days of lay-up in the Falklands waiting for the weather to clear along the Antarctic peninsula, the morning met brief from Rothera suggested that it merited an attempt to get south.

The BAS Falklands agent collected us in her trusty Land Rover, and myself, Mike (Rothera’s incoming base commander), and the two Dash-7 pilots, Ian and Doug, set off on the dirt track for the hour’s journey to Mount Pleasant Airport (MPA) where BAS’s de Havilland Dash-7 awaited us.

Arriving at the airport, we drove straight past the terminal building and continued on to an innocuous gate that opened straight onto the apron, where 200m away stood the Dash-7, awaiting our arrival. 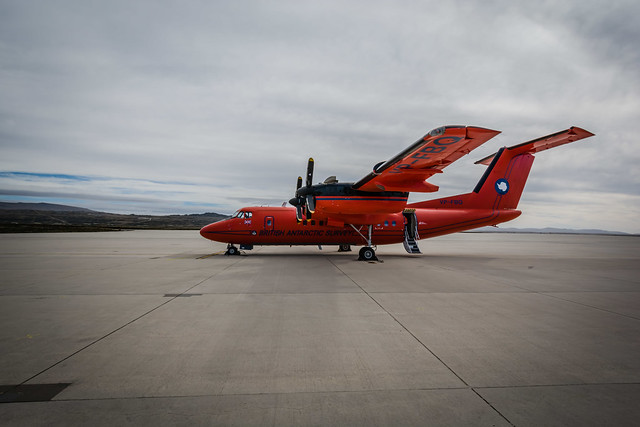 VP-FBQ flickr
The Dash-7 waits on the apron at Mount Pleasant Airport, Falklands.

It was refreshing to bypass the usual airport hassle, and we simply hopped out of the Land Rover, and carried our bags to the waiting aircraft. Chad, the aircraft mechanic who travels with the Dash, stowed our bags onboard and secured them under cargo netting. Mike and I were the only passengers onboard, as the Falklands-Rothera route serves predominantly as a cargo route, and then rest of passenger compartment was full of southbound cargo for Rothera.

As this was my first time heading South, the pilots kindly offered me the jump-seat in the cockpit for the flight. Needless to say, I didn’t need asking twice! Completing their preflight checks, the engines spooled up, and we were given clearance to taxi for departure. After pausing briefly at the end of the runway, Doug pushed the throttles forwards, and we surged off, seemingly using a fraction of the runway before we were climbing into the clear blue morning sky above the Falklands. 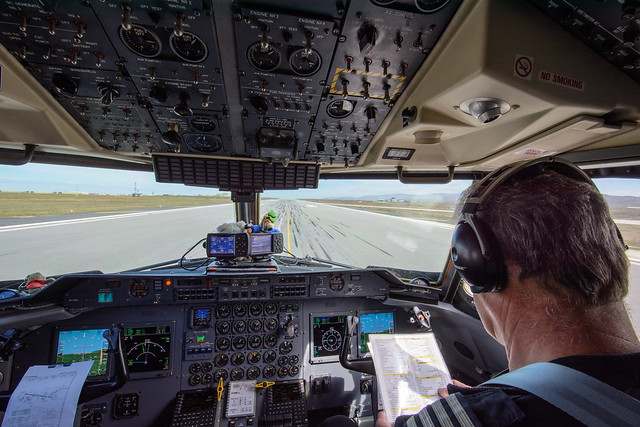 Cleared for take-off flickr
Doug reviews the Before Take-off checklist as we receive clearance for take-off. 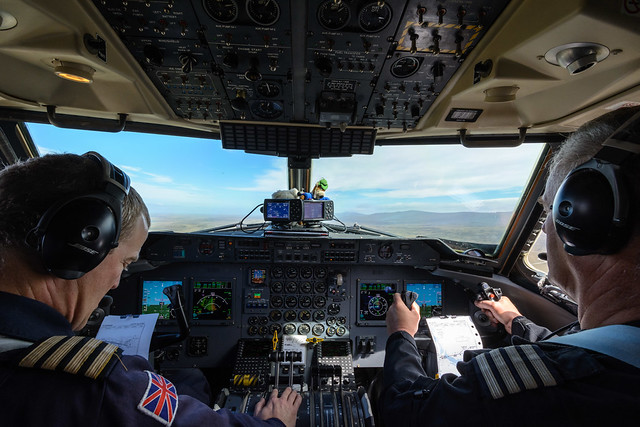 As we climbed out of MPA, we were vectored onto a course of 200º and banked to the south, passing close to Mare Harbour where we spotted the JCR at anchor, one of BAS’s two icebreakers, taking on fuel. 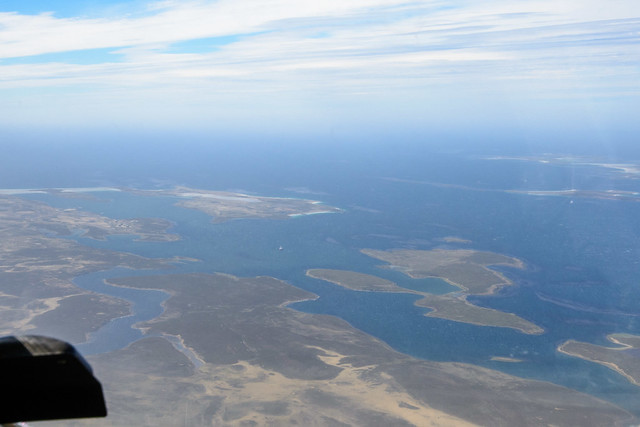 After reaching our cruising altitude of 18,000ft and encountering a stiff 45 knot headwind, I headed back into the cargo-dominated passenger compartment to pass the time until we began our descent. As we headed further south, white specks began to appear on the water below: sea ice. 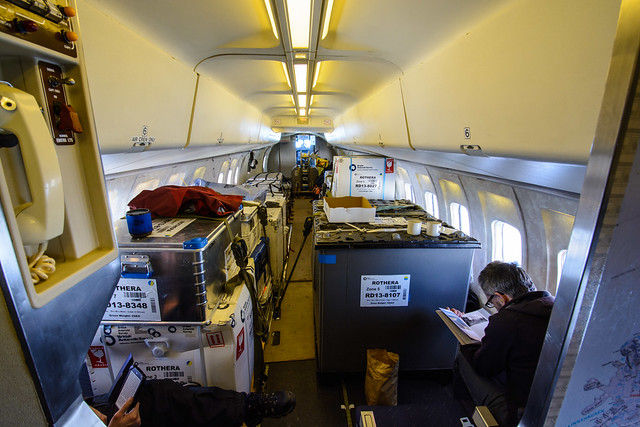 Inside the Dash flickr
Looking forwards towards the cockpit from the back of the Dash.

Around five hours later, we began our descent and I made my way back to the flight deck. As we descended through 10,000ft, the coastline of the Antarctic peninsula was now clearly visible to our left, and looming up in front of us was The Gullet, a narrow channel that separates Adelaide Island from the mainland peninsula. The descent was already steeper than one experiences on commercial flights, but it was about to get better - we descended below the level of the surrounding mountains and wound our way through the channel, banking steeply to avoid the steeply rising sides, with the Terrain Awareness and Warning System alarming “Terrain!” every so often! 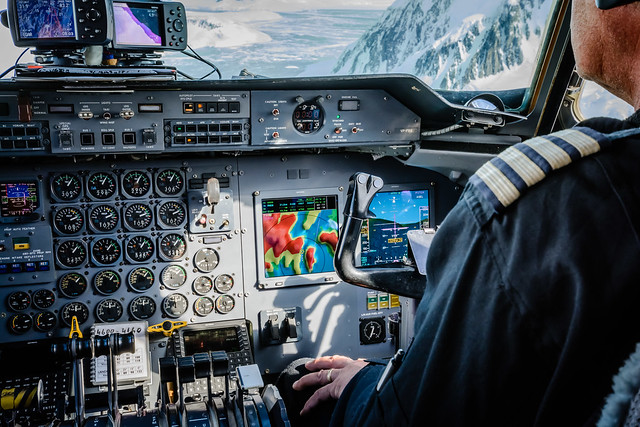 Terrain! flickr
Glancing over Doug's shoulder at the EFIS display alarming with "Terrain!" 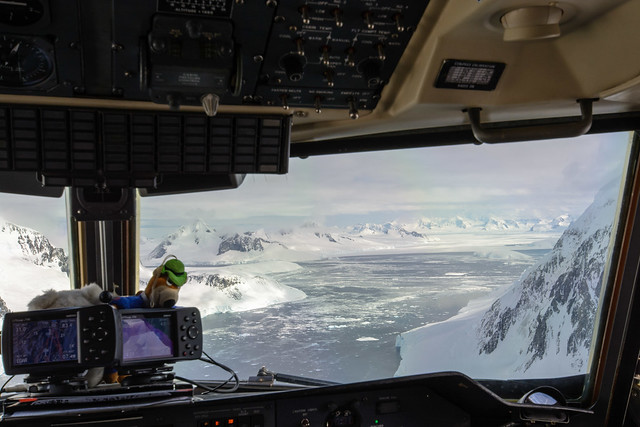 Peeking out of Gunnel Channel #1 flickr
As we skirt one of the taller peaks of Hansen Island (right), we look out into The Gullet with Sorge Island just ahead.

We flew down the eastern side of Adelaide Island at low-level, giving spectacular views of the snow-covered coastal mountains, with glaciers scarred by deep crevasses flowing down their sides. Beneath us, the sea was still frozen with the trails of Weddell seals clearly visible in the snow. Descriptions of Antarctica are frequently liberal in their use of hyperboles, but having witnessed it first-hand, their use is justified: it is a stunningly beautiful wilderness. 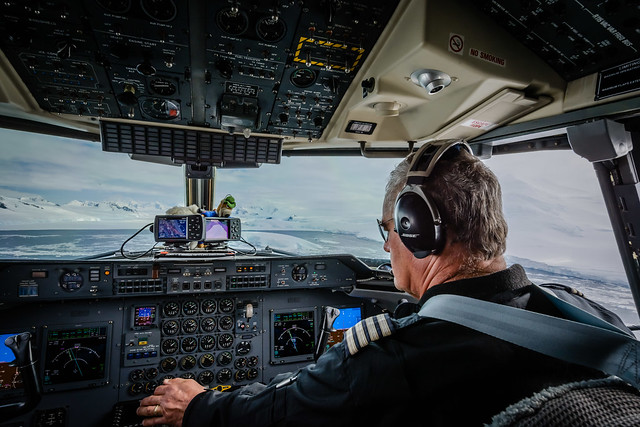 Soon, I was given my first view of my home for the next 18 months: Rothera station came into view, a small speck at the bottom of Reptile Ridge. As the winds were reported to be northerly, we flew a loop of the station, providing an aerial overview of the local area. 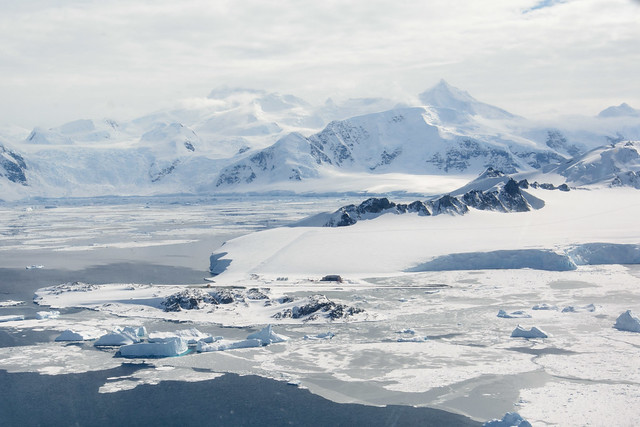 Rothera from the East #2 flickr
A good view of Rothera with the route up the Ramp and the Traverse by Reptile Ridge clearly visible. 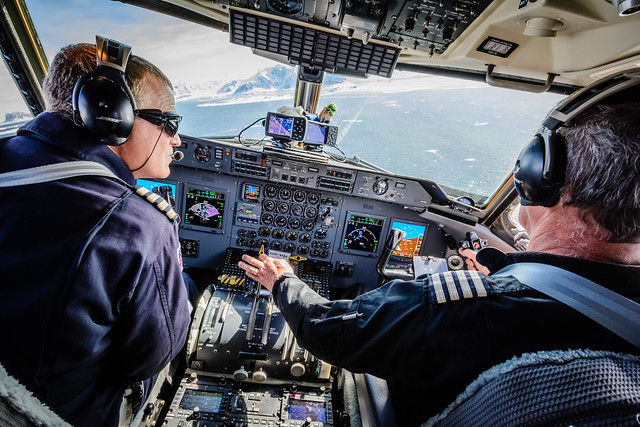 We banked steeply onto our final approach, flared, and gently touched down on Rothera’s 900m gravel runway with barely a jolt – a testament to the consummate skill of the Air Unit’s pilots. 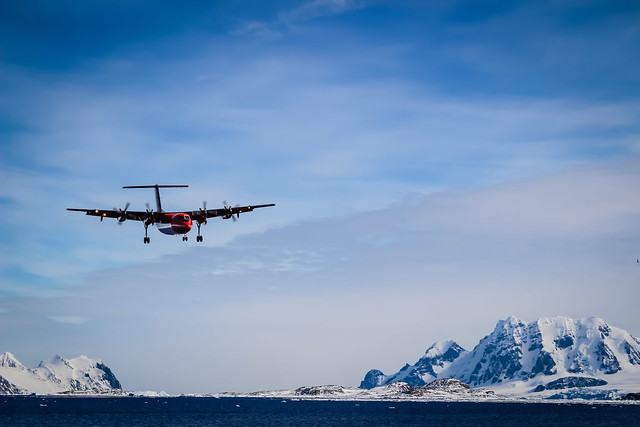 BQ on Finals #3 flickr
The Dash-7 I'm flying in on as it's on finals for Rothera. Photo by Simon Rouen. 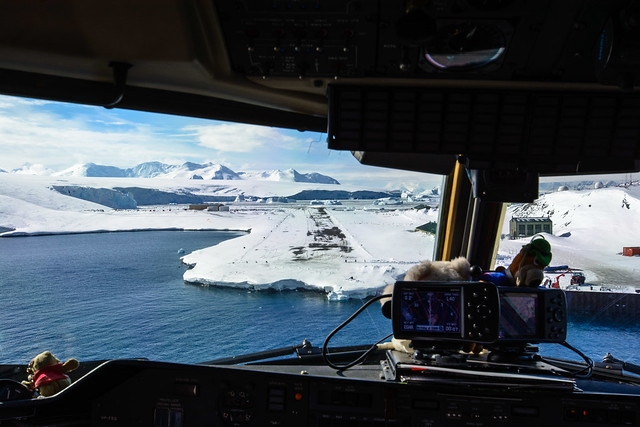 On Finals #4 flickr
Just before touching down on the 900m compacted gravel runway at Rothera. 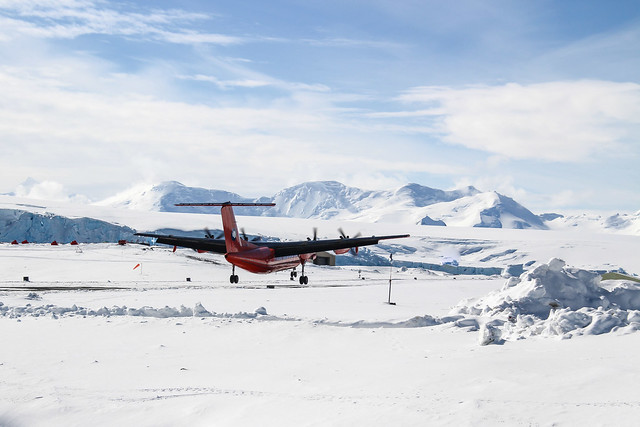 Flaring #2 flickr
Bravo-Quebec flares as we touch down at Rothera. Photo by Simon Rouen.

We taxied onto the apron, and with the engines shutdown, I was welcomed off the aircraft by Matt, the outgoing base commander, and given a brief tour of the station before settling in and unpacking.

Whilst I’ve been training for this post for the past six months, it’s still sinking in that I’m actually here, and the flight from the Falklands was a truly breathtaking introduction to Antarctica. It’s good to be here.