If things are going to plan on an Antarctic station, the doctor’s medical workload remains relatively light. In order to occupy the time the doctor traditionally takes on additional roles1, and at Rothera this involves running the station’s shop and Post Office. 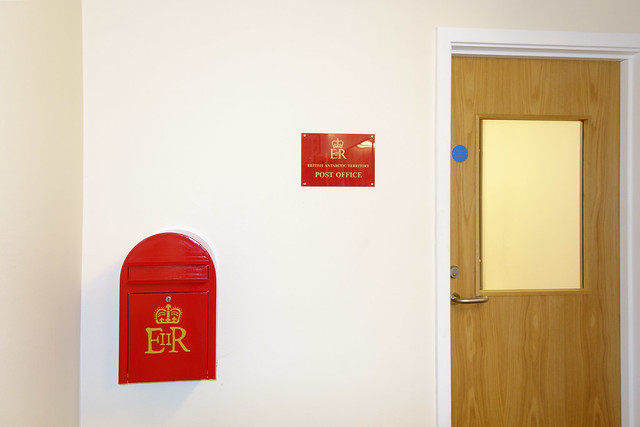 Whilst the collection and delivery times of the mail can be somewhat erratic (depending on flight rotations to the Falklands and calls by ships)2, Rothera maintains an official Post Office, with the Base Commander as Postmaster. Tradition dictates that the Base Commander delegates this responsibility to the doctor, as the Deputy Postmaster. Mail is sent via the Stanley Post Office, apart from items addressed to other Antarctic stations, in which case they get placed ad-hoc on the next available flight going near that station.3

In addition to providing a place to post mail, the Post Office sells a full range of British Antarctic Territory stamps, and a range of First Day Covers. Prices tend to be pretty reasonable given the logistics involved: 65p to send a postcard home.

However, on my introduction to the Post Office, the postbox was a rather mundane, functional unpainted stainless steel box, which did not quite seem befitting on something that contributes to Britain’s territorial claim. Hence, one quiet weekday afternoon, I set about painting it a more traditional colour. 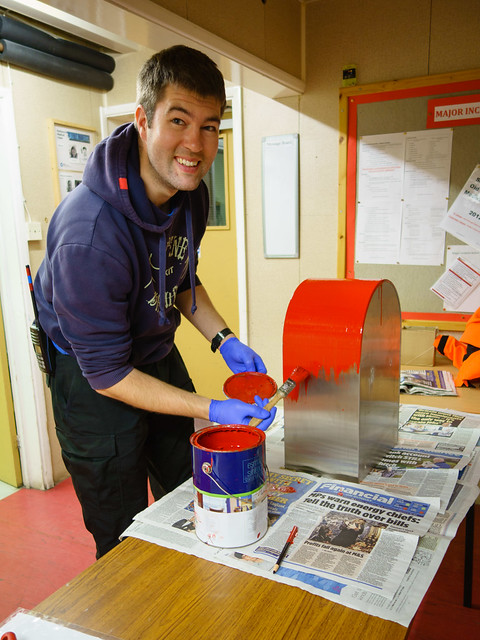 Painting the postbox flickr
On arrival, the postbox at Rothera was unpainted stainless steel. On a quiet afternoon, I sought to rectify the situation.

The station’s shop is little more than a large walk-in stockroom, but once a week we open up shop on some makeshift tables before dinner. The variety of stock is a little eclectic, ranging from branded T-shirts and hoodies, to Antarctic maps, baseball caps, thermal mugs, ties and postcards. 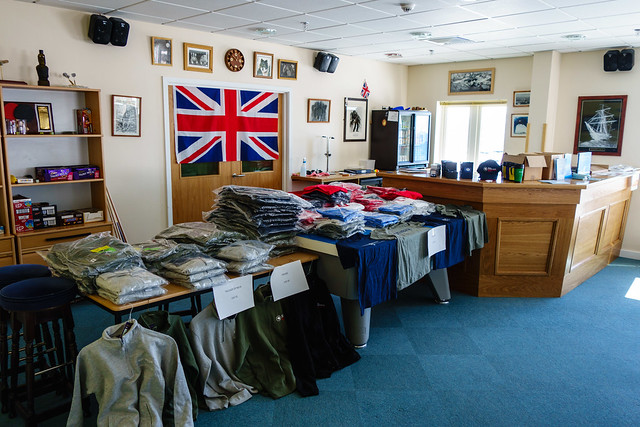 Rothera Bazaar flickr
In preparation for the Palmer's arrival (a US icebreaker), the bar at Rothera was transformed into a makeshift bazaar for selling merchandise to the visitors.

In addition to selling to just fellow station folk, the few ships that call in at Rothera also provide good custom. Last week, the US icebreaker Palmer called in, and we opened up shop in the bar - shifting over half of our remaining stock. Fortunately, with the JCR due to arrive for relief on 28th December, our new stock is just around the corner.